In February, 2012, an article was discovered in the January 22, 1876 Eau Claire Daily Free Press.  It indicated that the Eau Claire Curling Club was first established on January 14, 1876. Later it was established through Articles of Incorporation as the Indianhead Curling Club in 1956. On the 20th of June, 1956 the signatures of George Carroll, J.W. Lowe, Ian MacKenzie, Sy Manix, Harold Smith and Raymond Beede were notarized. Wisconsin Secretary of State, Mrs. Glenn M. Wise, filed the Articles on June 22, 1956. In 2010, the membership approved modifications to the ByLaws and Articles of Incorporation allowing the club to apply for non-profit status.

The Indianhead Curling Club began indoor curling in the Eau Claire County fair building on Fairfax Ave in Altoona. The original building was small, requiring the two sheets of natural ice to be shortened. The clubroom was the uninsulated kitchen area used for 4-H meal preparation during the summer. The county added a larger section to the building making it possible to have two sheets of regulation ice. During this time there was no water at the facilities during the winter and ice was made by hauling in 50 gallon drums of water. As the club grew in the 1970s, a third sheet of ice was added, but the width of the building forced the sheets to be slightly narrower than regulation causing a biter on the sides to be removed from play as it would be off the sheet. A modular viewing room was added and had to be assembled each season and stored off-site during the summer.

In 1975 a new clubhouse was built by the members providing rest rooms, a small kitchen and a free-standing fireplace. The clubhouse was designed to be used as the storage facility for ice mats, viewing room, stones, brooms and other curling artifacts during off-season. The club added fluorescent lighting and moved to artificial ice during the same period with the addition of removable mats connected to a used compressor. Each season the mats were moved out of the clubroom, rolled out and covered with sand to level the curling floor which was about 5-6 inches different from one end to the other. While artificial ice helped to guarantee a more consistent curling season, it still took many, many floods to bring the ice to a level playing area. When a new, permanent, heated viewing room was constructed by members, the mats were extended to provide additional space behind the hacks which had been against the walls in prior seasons. Bernie Bernicke, long-time ice maker, documented his ice making procedures in "the old days".

In January of 1995, the ByLaws were modified to change the name of the club to the Eau Claire Curling Club. In August of 1995, club members began devoting their evenings and weekends to the building of the current facility. Under the leadership of club members Geoff Goodland and Doug Ottum, the direction of the general contractor, and with the assistance of various trades, members "built" the club. In January, 1996 at the Men's bonspiel, the first ceremonial stone was delivered by long-time member and ice-maker, Bernie Bernicke, in the new facilities. We now have four sheets of ice and are able to make ice in about a week, extending our season by over two months compared to the early days of natural ice. The current building is Eau Claire County's multi purpose facility and includes a full kitchen, rest rooms, clubroom with large viewing windows and fireplace, as well as a heated curling area. The ECCC is a 501c3 nonprofit.

The ECCC has hosted numerous bonspiels and USCA Championships and play downs at the club and Hobbs Ice Center. State curling competitions including men's playdowns, junior boy's and girl's championships, and mixed doubles have been held here.  January 2020 the club hosted the Junior National Championships.

Club membership includes a 1998 Team USA Men's Olympic curler (Nagano, Japan), Mike Peplinski. In addition we have had junior champions, high school district and state winners and national college champs as well as mixed national and senior national winners. In April 2011, Geoff Goodland skipped his Senior Men's team to a Silver Medal in the World Championships representing the USA in St Paul, MN. USA Curling named the rink Team of the Year Team of the Year for 2011.

The 2001/2002 season saw about 100 members. From 2008 to the 2010/2011 season the number of curlers increased from 138 to 315. The increase, in part, was due to the significant exposure during the Winter Olympics in Vancouver, BC. The 2010/2012 season was introduced with a new club website allowing members to register online. Bonspiel registration as well as league scores and statistics were also accessible on the site. The ECCC currently continues with nearly 300 curlers.

Since its beginnings in 1956, the club has witnessed four "8-ends”. The first was lead by skip Bob Scott, the second by Nora Fuller in 2007, the third by Stuart Lorentz in 2008, and the fourth by Gary Kučko in 2014. Keith Hammond, a club member, skipped a team to an 8-end during the Centerville Mixed Bonspiel February, 2012. 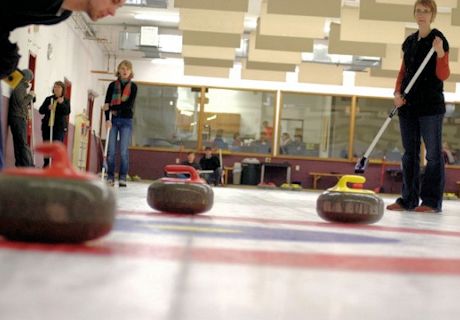 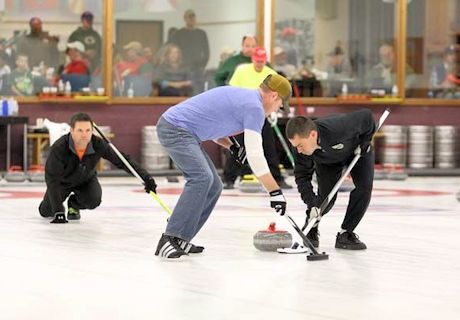 We have leagues that fit everyone. READ MORE 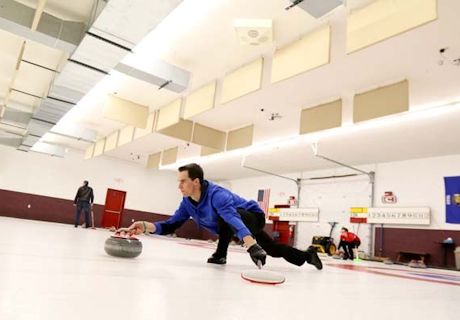 Come out and enjoy one of our friendly and fun bonspiels! READ MORE
Contact Us

Our Club sports 4 sheets of great ice that are in constant use by adults and kids alike. With a variety of leagues throughout the week we're sure there's something that can fit into your busy schedule. Fees are extremely reasonable.  If you require assistance in selecting a league that is right for you or your family, please contact our Club Manager at: manager@curlingclub.com.